Previously, I wrote about when restaurants mix and match different types of cuisine and the concerns it raises — culinary, political, financial, etc.

No need to rehash the issue, but my sister pointed out this fantastic example which I feel compelled to share.

I think this is not only a bad culinary idea, but is a concrete example of the dismal state of the American economy right now. I mean, you’d have to be financially desperate to add Indian food to your pizza joint, right? It might be different if it was just an Indian restaurant that had their own culinary take on pizza — maybe with Naan for the crust. But look how the sign is set up — “snappy’s” is set in a serif font, “pizza” is set in a sans-serif, and the “indian cuisine” part is sans-serif italic and slapped in the middle of the two as an after thought. No matter what the food is like, typographically it looks like financial disaster.

I promise to try the food. Really. Besides, its very close to the liquor store in case things go horribly wrong.

Unfortunately, he was heading uptown on the Q line which dead-ends at 57th street. He’ll have to ride the entire length of the line back in the other direction to get out to the beach at Coney Island.

Long before the recent (relatively) peanut salmonella scare, I was having my own battle with the National Peanut Board.

My dilemma started, as is often the case, on the subway. The Board was heavily advertising on the subway and as I love peanuts, I finally broke down and said, “damn, I’ve got to get me some peanuts.” Not just any peanuts though. I’m picky. I prefer peanuts in the shell — and here’s the key — salted. Now in my experience, this isn’t a big deal. In cities across this great peanut-loving nation, salted peanuts in the shell are easily purchased in a big bag at a supermarket. And since I now live in New York City — where a person can get just about anything under the sun (and delivered at that) — I went down to my local market.

But alas, it seems that it’s nearly impossible to get a salted, in-shell peanut in NYC. The market had tons of big bags of peanuts in the shell — but all of them unsalted. (It’s like comparing a cucumber to a pickle. I’ve never bought a cucumber, but I eat pickles all the time.) Sure, I could have created a brine, soaked the peanuts and then dried them, but I didn’t have the time, the money or more importantly the will. I wanted salted peanuts in the shell and I wanted them now!

This inevitably led me on an all points multiple store search which turned up but a single tiny bag at a local bodega containing about 4 peanuts — and costing about $4.00. Hungry and angry, I turned to the internet for salvation. Perhaps there was a giant peanut processing warehouse somewhere in the city where I could roll around in a massive pile of salted in-shell peanuts.?

Shockingly, no. The only places in the city that had peanuts were specialty stores featuring gift baskets — and no salted, in-shell peanuts. None. Nada. Zip.

This led me to seek out the Peanut Board because if I wasn’t going to be able to get any peanuts, I wanted them to stop advertising the damn things. It’s just cruel. (I did feel some solidarity with the poor folks in third world countries who are constantly blasted with the advertising of things they can’t get, let alone afford.)

So I emailed the Peanut Board (via their website) saying just that — either stop advertising (and making me hungry) or encourage vendors to start supplying the NYC area with salted in-shell peanuts. We’re here, we’re hungry and we’ve got money. Why not start selling the damn things?

Not surprisingly, I received no response from the peanut board. It did seem that the ads on the subway lessened but that may have just been the expiration of the ad contract versus any action instigated by my email. Nor did market shelves suddenly swell with bags of salted peanuts. Sigh.

And then along comes news that the processing of peanuts has been tainted with salmonella. So what does the peanut board do? Come out with a new round of advertising touting the health benefits of peanuts of course. I still can’t get a damn salted peanut in the shell and to top it off every time I buy any product with peanuts in it, I take a minute to ask myself if I’m prepared for a bout of potentially lethal food poisoning.

(As a side note, I should let you know that my wife, upon hearing of my dilemma and my email to the peanut board, is convinced that I’m guaranteed to become the grumpiest curmudgeon ever.)

Just writing this post has given me a craving. Please send me peanuts. Salted. In the shell.

…Bacon’s got a new best friend. And his name is fudge.

Classic Simpson’s lines aside, I did recently come across a new partner for one of my all time favorite foods — the hot dog.

Those who know me, know of my long standing love of hot dogs. All things hot dog.  I can’t get enough of them and the joke has been made that my body won’t decay after I die due to the massive amount of nitrates I’ve ingested via hot dogs. I can easily eat ten in a single sitting.

Now one may think that there’s not a lot of innovation left in the hot dog world. That the entire concept is played out. That hot dogs are relegated to backyard BBQs and the kid’s menu. Not so, my friend. Not so.

I’ve tried many a fine hot dog topping in my day. I love Chicago style dogs with yellow mustard, nuclear green relish, chopped onions, tomato wedges, a pickle slice, peperoncini, and a dash of celery salt. i love New York style dogs – either grilled or boiled right off the cart. And of course, my own special toppings set: honey mustard, jalapeno slices and melted cheddar cheese. I could go on and on.

The new addition to my list of favorite hot dog toppings is simple in it’s application and huge in taste and flavor while still being completely complimentary to the hot dog itself. (One may argue that all the best hot dog topping by definition are simple in application.)

It is this simple application of flavor that makes me so fascinated by this topping (as well as being addicted to it — I’ve already eaten four just to ensure it really is as good as I think.)

It’s so good that I’ve been kicking myslef asking “why didn’t I think of this?”

And naturally, it’s got me thinking “what other tasty deli meats would go well on a hot dog?” Perhaps, I should try them all?

I don’t know why I never thought of adding other meats to my hot dog. I mean, it seems like the perfect thing. I’ve always been a big fan of what I like to call “the barnyard sampler” — a hot dog made with turkey, chicken, beef and pork. I’ve had bacon wrapped hot dogs before. Maybe I should add some pepperoni to my next hot dog. Or salami, or capicola? The varieties are endless. And so delicious.

(A tip of the hat to my friend Bob who I believe first coined the term “barnyard sampler.”)

Usually when I see two (or more) countries cuisines merged under a single restaurant roof, it’s a sure sign to steer clear. I mean, as a chef shouldn’t you focus on one type of cuisine instead of creating your own United Nations food court? The results are never pretty. Here’s some real world examples I’ve run across:

Now, beyond the culinary aspects of attempting to prepare and serve two distinct types of food (not to mention the restaurant decor), that last one on my list raises a whole other issue: political. The Chinese and Japanese have repeatedly invaded each other committing horrible atrocities and even today barely tolerate each other’s existence. Maybe I’m thinking too much but if see “Chinese and Sushi” on the same menu, I’m not thinking it’s some Kumbaya hugfest in the kitchen. I mean, the chefs are armed with very sharp knives. If I see that sign, I’m thinking that one chef — either Chinese or Japanese — is being forced to commit treason to his homeland by preparing the cuisine of the other and mostly importantly, it’s probably to ward off the scent of imminent restaurant failure. And even if that’s not the case, you just know his heart’s not in it.

Recently, though, I had to good fortune to experience some delicious cross culinary cuisine and it was due to the fact that I never saw the sign. I just ordered take out from the menu (or I should say, my wife ordered for me without telling me what she was getting). To be fair, it wasn’t that far of a cultural stretch either. We ordered from a new pizza joint. Now pizza, despite it’s American origin, has traditionally been associated with Italian cuisine although the strength of that culinary relationship varies widely from place to place.

This particular place seemed fall somewhere in the middle between American and Italian — at least at first glance. Beyond pizza, they offer several Italian dishes such as pasta and veal. But upon further inspection of the menu on subsequent orders (yes, it was good enough to repeat order), the menu offered some strange and deliicious options.

The dish I’m in love with actually references three cultural cusines which is a nifty trick for a chef of any stature.

Enough with the beating around the bush, here’s the ingredient list:

Why waste time getting a side of cheese fries? Just slather them on top of your hot dogs (plural) and roll ’em up in a tortilla. My loving wife — knowing my predilection for anything hot dog related — ordered this by chance. And I’ve forced her to order it again several times since (thanks, babe!).

The one problem is they don’t have a good name for this dish. It’s so bad of a name that I can never remember it. Not even now. And a dish as magnificent as this one deserves a good title. Maybe “Cheese-Fry-Dog-Wrap”. I don’t know……….it doesn’t really compete with a great name like “hoagie”. Let’s work on it.

And for those of you keeping score at home, technically, it’s probably only two cultural cuisines crammed together — American and Mexican. But since it’s being offered from a pizza joint, I’m counting Italian too. It’s not too far of a stretch. I could have referenced Irish cuisine due to it’s inclusion of the potato. That would have gone too far.

Of course, long time readers of this blog will notice one other reason I love this dish. The meat log factor. Yup, just wrap a bunch of meat and goodies in a handy delivery device such as a tortilla and I’m in love.

Apparently, I’m going to have to re-evaluate my skepticism toward these cross culinary ventures and be a little more adventurous in my restaurant choices. (Within reason, if history backs me up, I ain’t going in the front door.)

Things That Hurt My Stomach 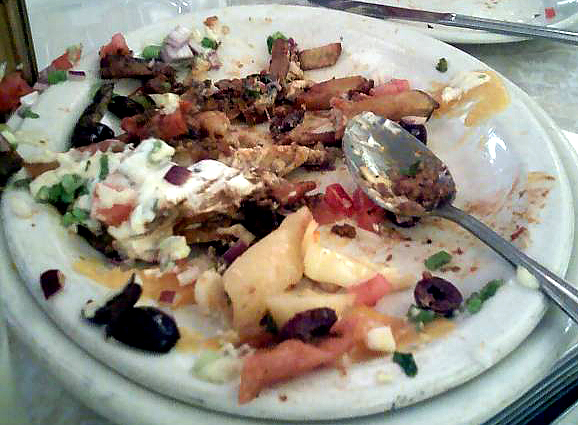 Jewish Nachos:
As far as I can remember, it was a big ol’ pile of french fries covered in sour cream, two kinds of melted cheese, beef chili, pastrami, red onions, pickles, green peppers, black olives, tomatoes and in case you were feeling healthy — a side of sliced fruit.

It was delicious, but absolutely unnecessary.

Note to self: Never take brunch recommendations from waitresses with bad dental work.